Villa Hotel Barbat was rated the best hotel on Rab Island in 2005, according to the guests, being the only hotel with a 100% recommendation.

We are here for all of you who want to exercise their right to the best. Villa Hotel Barbat is an old Villa made of stone dating to the fifties of the last century.

During the last few years the Villa has been thoroughly renovated preserving the charm and beauty of the past resulting in a unique combination of the original stone architecture harmonized with the charms of the scented Mediterranean plants right by the sea.

As part of the flowery terrace there is a roofed loggia with a large aquarium with marine fishes and crustaceans. Here you will also experience a little bit of our Mediterranean history, which you will be reminded of by a 2000-year-old amphora, a wooden press for processing olives and a stone vessel for storing oil through the exhibition of the museum of olives and olive oil. In such an atmosphere and such surroundings begins your gastronomic pleasure of enjoying the à la carte half board offer (breakfast and dinner).

In the centre of Barbat on the island of Rab, next to a church and next to the sea, on the foundations of what used to be a Benedictine monastery, is where the family Hotel Restaurant Barbat is situated. It is a place right next to the sea where you will find the spirit of ancient, almost forgotten times, nostalgic beauty, originality and tranquillity, composed harmony of old stone architecture and scented Mediterranean plants.

Amphorae and stone vessels, an old wine and olive press tell the story of the ancestors. In such an atmosphere and such surroundings begins your gastronomic pleasure. The uniqueness of the offer are the specialties created as the fruit of the chefs' current inspiration, based on the local fishermen's daily fresh fish, season vegetables from the island's market, and lamb raised on the island's pastures. You can choose your lobster or spiny lobster from the restaurant's lobster tank. Olive oil and spices are family grown and produced. The menu, as well as the wine list have been designed by the owners' family putting an emphasis on experience and the specificities of island cuisine.

The fishes and crustaceans swimming peacefully in a large aquarium with sunken ships and amphorae not far from your table will put the final touch to your comfort and relaxation.

Restaurant Barbat has won the award for the most beautiful and best decorated terrace on the island of Rab many years in a row, and numerous awards for its cuisine and the quality of the hotel.
It entered the top 100 list of Croatian restaurants in 2008, 2009, 2010, 2011,2012. and 2013.

It was included in the Good restaurants Croatian 2012th 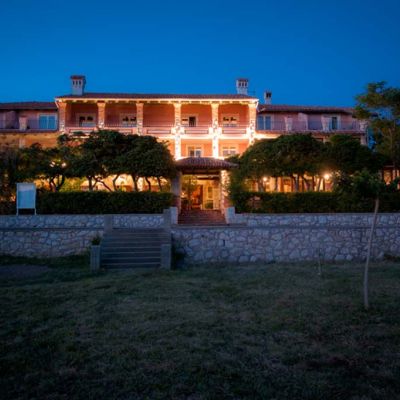